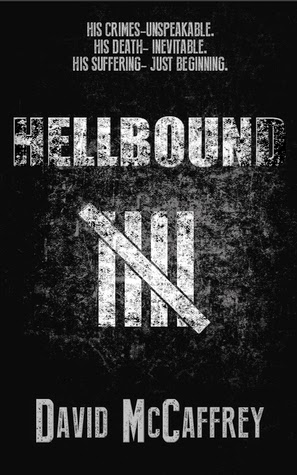 I'm always on the lookout for crime books with that little something different so I was really pleased to be invited to be a part of David McCaffrey's blog tour for his debut novel Hellbound. The blurb made it sound like just the type of crime novel I would enjoy with a touch of the unknown with the mention of the afterlife & the possibility of some horror.

His crimes - unforgivable. His death - inevitable. His suffering - just beginning.

Obadiah Stark aka The Tally Man, is executed at ADX Absolom, his death sentence watched by the world's media, victim relatives and one investigative reporter, Joe O Connell. Penning an account of Stark's personal history and subsequent crimes in the hope of determining what elements make the sociopathic mind tick, Joe discovers clues and inconsistencies which cause him to investigate Stark's execution.

While this is happening in the real world, Obadiah Stark awakens to an afterlife where he has a wife and daughter bound to his childhood hometown. Following his natural predatory instinct, Obadiah proceeds to torment the town, committing multiple murders before being gunned down by the police. He awakens to find that everything has reset, with no one recalling his murderous spree a reality which offers no escape. As the scenes repeat, he is forced to submit to emotions he has never experienced before... and with it, a poisonous dose of morality.

When the story opens we are waiting with the rest of the world for execution of Obadiah Stark, a serial killer like none the world has ever seen. A murderer who escaped police capture for almost 20 years, murdering 27 young women on two continents just for the fun of it. Obadiah earned himself the name 'The Tally Man' due to the tally markings he has marked on his back, one to represent each of his victims. He is perhaps one of the worst serial killers ever known largely down to the fact that as he awaits his lethal injection he shows absolutely no sign of remorse & no fear about his imminent death. The execution goes ahead as scheduled under the watchful eye of the world's media including investigative reporter Joe O'Connell.

Joe is writing a piece about Stark and during his research & the interviews her conducts after the execution he begins to find some inconsistencies with what happened on the night Stark died. Stark meanwhile has woken up after he has been executed in his own personal hell, living back in the town where he grew up with a wife and a young daughter. It's almost as if he is experiencing his own groundhog day, continuing his murderous spree on the other side but then waking up the next day unsure it ever happened. You see Stark start to unravel and his mental state become very unstable.

I have read an awful lot of crime novels but I can honestly say that I have never read one quite like David McCaffrey's Hellbound. The story is totally unique and had me totally gripped from the start. I had absolutely no idea what journey McCaffrey was going to take me on & had so many thoughts running through my head. Was I going to be plunged into the dark world of an un-repenting serial killer? Would good win over evil? How the hell has Stark ended up alive and in the afterlife? Where on earth is this story going to end?

I found myself totally immersed in the book which is told from both Joe & Obadiah's points of view. This led me to have a connection with Obadiah, a connection that I wasn't quite comfortable about. I saw the crimes he committed through his eyes and felt somewhat unclean, this is a mark of McCaffrey's clever writing. He writes the book so well from both Joe & Obadiah's side that at times you actually find yourself feeling sorry for Obadiah.

I thought that the author tackled the issue of the death penalty very tactfully and his storytelling made for a very thought provoking look at the morals around execution. An eye for an eye and all that. The books is extremely well plotted with unexpected twists & turns that really do keep you guessing right up until the very end. I would highly recommend it to all crime fiction lovers especially those of you that are looking for something a little different. Overall an excellent debut & I am looking forward to seeing what David comes up with next. 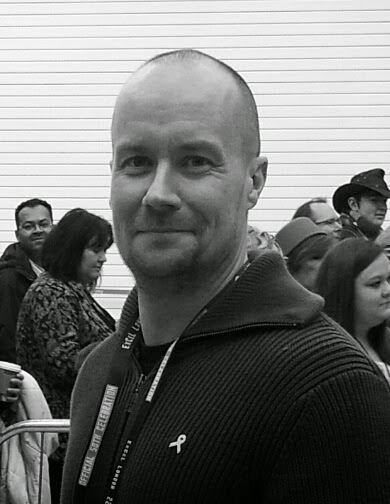 David lives in Redcar in the North East of England and works as an Infection Prevention and Control nurse in a local Acute trust. His wife Kelly is his muse and ardent (but constructive!) critic of his work. He has a seven year old son Jake and a little boy Liam, who is a few months old. Jake once took some draft pages of his Daddy's work to school to draw on which prompted the school to become concerned about the books Jake was having read to him!!! The school were relieved when they found out Jake was not being subjected to books such as Hellbound.
Posted by Unknown at 20:09