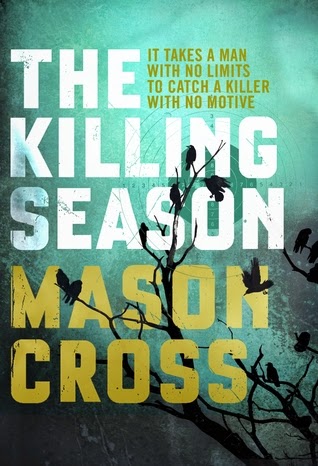 The first thing you should know about me is that my name is not Carter Blake. That name no more belongs to me than the hotel room I was occupying when the call came in.
When Caleb Wardell, the infamous 'Chicago Sniper', escapes from death row two weeks before his execution, the FBI calls on the services of Carter Blake, a man with certain specialised talents whose skills lie in finding those who don't want to be found. A man to whom Wardell is no stranger.
Along with Elaine Banner, an ambitious special agent juggling life as a single mother with her increasingly high-flying career, Blake must track Wardell down as he cuts a swathe across America, apparently killing at random.
But Blake and Banner soon find themselves sidelined from the case. And as they try desperately to second guess a man who kills purely for the thrill of it, they uncover a hornets' nest of lies and corruption. Now Blake must break the rules and go head to head with the FBI if he is to stop Wardell and expose a deadly conspiracy that will rock the country.
Slick, fast-paced and assured, THE KILLING SEASON is the first novel in the gripping new Carter Blake series.

I get really excited when I discover a new series and just reading the blurb of Mason Cross's first book in the Carter Blake series had me clapping for joy. I saw reviews that compared the books to Lee Child's Jack Reacher so I had high hopes and The Killing Season doesn't disappoint.

Carter Blake, the male protagonist of the series is the man people go to in order to find people who don't want to be found. In this case the person in question is Caleb Wardell the infamous 'Chicago Sniper' that has escaped from prison whilst being transferred two weeks prior to his execution. The FBI recruit Carter's services in order to help them track Wardell down, ideally before the press get wind of his escape. FBI agents Steve Castle and Elaine Banner are brought into help capture Wardell before his escape becomes public knowledge.

Blake is thrown into a manhunt to stop a killer who has no trouble in leaving behind a high body count. Caleb Wardell has scores to settle and he won't stop until he is caught. Wardell likes to play games and this time his opponent is Carter Blake.

This is one of those books that compelled me to keep reading right from the very start with the drama surrounding Caleb Wardell's escape. Mason Cross packed the story full of excellent tension and suspense throughout. It's a quick read that is both well written and well plotted with great twists that keep the suspense ramped up to the very last page.

I loved the anonymity of Carter Blake, how he can do what ever he pleases that and that he is such a good guy plus we are left with so many questions about Carter Blake and his past. I am so excited to have found such a great new character. It's been a really long time since I have found such a strong, likable, enigmatic character possibly not since reading about Jack Reacher or Alex Cross. Wardell was an excellent & psychotic villain and I also found Agent Banner an intriguing and likable character & hope to see her make a return in future books.

This is without doubt one of the best debut thrillers that I've read in a long time - a fantastic page turner that left me totally hooked on Carter Blake and Mason Cross has left me wanting more. A highly addictive read and Mason Cross is certainly one to watch.
Posted by Unknown at 15:52