Review: The Far End Of Happy by Kathryn Craft 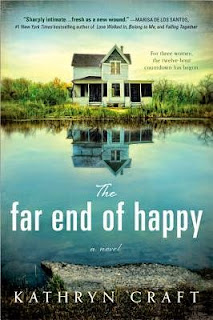 The Far End Of Happy by Kathryn Craft

Twelve tense hours, three women, and the suicide standoff that turns one family's little piece of heaven into a scene from hell

After enduring years of a struggling marriage, Ronnie Farnham has decided to divorce her husband and is beginning to hope for a happy future--until the morning Jeff is supposed to move out, when he locks himself in their barn with a rifle.

When a massive police presence arrives to control the 12-hour stand off, the women in Jeff's life are pushed to their breaking points. Based on the author's harrowing personal story, The Far End of Happy is a powerful novel about the way one man's spiral towards life's violent conclusion tests the resolve, love, and hope of the women he will leave behind

Whilst browsing Netgalley I was initially drawn to the cover of this book, so pretty & so peaceful but then I read the blurb & realised that this was definitely a case of never judge a book by it's cover. The blurb left me intrigued and having been touched by attempted suicide & depression in my own life I felt that 'The Far End Of Happy' was going to be an important book for me to read.

Ronnie Farnham, has always been prepared to overlook so many of her husband Jeff's flaws but his alcoholism and the serious debts he has racked up lead her to file for divorce. Jeff has been on the road to self-destruction for a long time and Ronnie as finally gotten to the point where she can no longer be with her husband for her sake & more importantly for the sake of her 2 young sons. The story starts on the morning that Jeff is supposed to be moving out of the family home, he's drunk and planning on driving. Ronnie and one of her young sons try to stop him and this results in the hostage stand-off with the police.

Ronnie is able to get away from the farm with her sons and then spends the next 12 hours cooped up in a room with her mother and her mother-in-law whilst the stand-off between Jeff and the police plays out. Ronnie's mother-in-law refuses to see that it is her son who has the problem and lays the blame firmly with Ronnie.The story is told from the points of view of all 3 women and through a series of flashbacks we learn a lot about Ronnie's marriage and that perhaps Jeff wasn't the husband and man that everyone thought he was.

Ronnie is an engaging character and I was able to feel her pain as she struggled with the impact her decisions are likely to make. This story is an important one and Kathryn Craft tells it well drawing from her own personal experience of suicide. The Far End Of Happy is based on true events from the author's past and Craft blends her own story effortlessly with fiction. She tackles the subject sensitively and gives deep insight into the minds of the loved ones touched by suicide. It's a novel packed with emotion and the 12 hour time-scale really ramps up the tension. Despite the outcome of the stand-off we are left with hope and the belief that Ronnie and her boys have a positive future.

I can't really say I enjoyed The Far End Of Happy as enjoy seems the wrong word when it comes to this type of book. The story did however touch me deeply but there was something missing for me but I can't quite work out what that missing thing was that would have given the book that 5th star. I'd highly recommend this book to reading groups are there are so many things that can be discussed.
Posted by Unknown at 12:29